On Wednesday I took on my first big "real" attempt at game mastering. The group I've been playing with had gotten a bit tired with its long-running D&D game and in order to mix things up I agreed to take on the GM mantle for a while and try running some adventures from the files of The Laundry. I'm a fan of Charles Stross' series, and I felt it would be quite fun for a series of one-off RPG sessions. My players don't have any familiarity with the books nor do they seem to have much other experience with the Cthulu mythos... I take it as an interesting challenge to keep things interesting and maybe introduce them to crazy new things.

Session 1 started with the obligatory character creation. I spent a bit too much time in an office supply store picking up the preparations I wanted. I wanted to be a prepared GM and in weeks before had already picked up extra polyhedral randomization devices and a battle map. Now, I may like office supplies a bit too much, but it also seemed quite fitting for the setting. (As I've told my players, The Laundry RPG can be thought of as Call of Cthulu meets The IT Crowd.) 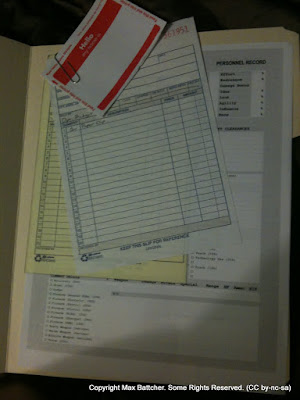 The biggest usage of the office supplies I purchased was these character packs. Plain manilla folder with a personnel record (character sheet) and a name tag, and a paper clip to bind them. The key piece that really sells this for me, though, and the thing I spent the most time figuring out was the "Paper Clip" acquisition form: 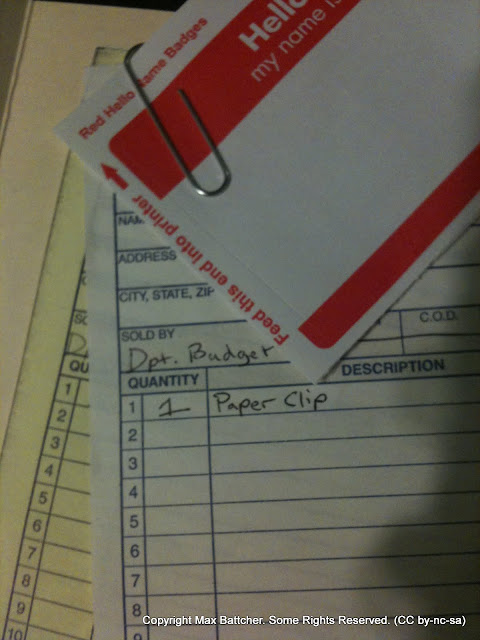 Certainly, none of my player's have read The Fuller Memorandum yet, but the threat of a paper clip audit and dealing with frightening-sounding Auditors I think came across well nonetheless. Making the players' characters sign a carbon copy form to acknowledge they indeed received one Paper Clip for the purposes of this personnel record certainly seemed to get the wacky, but maybe frightening bureaucracy thing across.

If I'm smart there will be a good payoff of dealing with the Auditors in some mission down the line. Unfortunately I don't have any plans for something like that: I'm still working from the point of view of a sequence of one-offs until the players or I get bored with the game. If I was planning for an "actual" campaign that would be something I would definitely work on. I do have crazy ideas if things start to become a campaign... [1]

After character creation we ran through the opening "linear railroading tutorial" training in Dunwich. My players and their characters all failed their Cthulu Mythos rolls and also seemed too interested in the game to "cheat" and search the internet for clues. The interesting reveals, I think, still wait for next session.

Earthdate
May 15, 2011
Next Post
On Condo Buying and Expectations of the Past's Future
Previous Post
Short Fiction Rejection Metrics
Tags